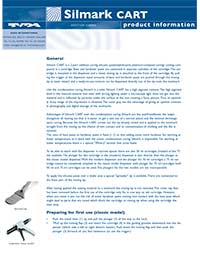 Silmark CART is a 2-part addition curing silicone casting compound in a cartridge. Silmark CART (gray) has a high pigment content to ensure an optimal sharpness of the casted impression under the microscope.
On the front side of the cartridge a mixing tip is placed. When the cartridge has been mounted in the dispenser equal parts of the base and harder paste are squeezed through the mixing tip and simultaneously mixed by operating the trigger. The mixed compound is directly applied to the toolmark with the mixing tip.
This casting material is very user friendly. The cast itself is stronger than one made with the Silmark packaged in a tube (condensation curing). The shrinkage after curing is also smaller.

Dispenser with cartridge and mixing tip in use on a test impression.

Standard mixing tip in use.

Spreader tip (is attached to the mixing tip) in use.

Dispenser, modern model with plunger for a 50 ml cartridge.

Silmark CART is a 2-part addition curing silicone (polyvinylsiloxane, platinum-catalyzed curing) casting compound in a cartridge. Base and hardener paste are contained in separate cylinders of the cartridge. The cartridge is mounted in the dispenser and a (new) mixing tip is attached to the front of the cartridge. By pulling the trigger of the dispenser equal amounts of base and hardener paste are pushed through the mixing tip (a static mixer) and a ready-to-use mixture can be dispensed directly out of the tip onto the toolmark.

Like the condensation curing Silmark in a tube, Silmark CART has a high pigment content. The high pigment level in the material ensures that even with strong lighting under a microscope light does not get into the material and is reflected by particles under the surface of the cast creating a fuzzy picture. Thus an optimally sharp image of the impression is obtained. The color gray has the advantage of giving an optimal contrast in photography and digital storage of the toolmarks.

Advantages of Silmark CART over the condensation curing Silmark are the userfriendliness, the larger elongation till tearing (so that it is easier to get a cast out of a narrow place) and the minimal shrinkage upon curing. Because the Silmark CART comes out the tip already mixed and is applied to the toolmark straight from the mixing tip the chance of skin contact and or contamination of clothing and the like is minimal.
The ratio of base paste to hardener paste is fixed (1:1) so that adding some more hardener for working at lower temperature, as is done iwth the classic condensation curing Silmark, is impossible. For working at lower temperatures there is a special "Wintry" version that cures faster.

To apply the silicone paste over a wider area a special "spreader" tip is available. There are connected to the front part of the mixing tip.

After having applied the casting material to a toolmark the mixing tip is not removed. The cover cap that has been removed before the first use of the cartridge only fits in one way on teh cartridge. However, when you reuse it you run the risk of some hardener paste coming into contact with the base pase which might lead to parts that are cured which block the cartridge or mixing tip when using the cartridge the next time.

Preparing for first use (classic model)

Preparing for first use (modern model)

Attaching a mixing tip and making a cast

Push up the metal lever on the back of the pistol grip (1) and pull the plunger all the way to the back. Now lift the locking flap (3) and lift the cartridge out of the dispenser. Push the locking flap back in place.

Push up the gray plastic lever on the back of the pistol grip and pull the plunger all the way to the back. Now turn the cartridge 90 degrees (counter-clockwise as seen from the back) so that the opening in the blue ring is facing up. Lift the cartridge from the dispenser.

There are materials that are known for poisoning the platinum catalyst in the hardener paste thereby blocking the curing process. Rubber, latex gloves and copper are know problem surfaces. So, better use nitrile gloves. On the surface the silicone doesn't cure resulting in a fluid surface of the cast and a fluid residue on the toolmark.

On these problem surfaces the classic condensation curing Silmark should be used.

The setting time of the Wintry versie at 5 °C is also about 5 minutes.

If the cast is taken up too soon after application and the curing is not yet sufficient you risk a irreversible deformation of the cast due to the force needed for removing the cast from the mark.

The shelf life of Silmark CART depends on the reaction rate of the platinum compound catalyst with oxygen from the air into inactive compounds. Try to use Silmark CART within a year of purchase. Store the cartridges at a temperature between 5 and 30 °C (cooler is better).